The American Dream, football, baseball, peanut butter, mac and cheese, chicken and waffles, pretzels, and many other aspects of American culture call the foreigner’s attention when they arrive to America, the land of opportunity. However, learning about a culture is completely different from being immersed in it. I have previously studied American culture and I anticipated that it would be gentle to adapt, however it was more difficult than I had thought it would be. Why? A concept I had heard from one of my friends appeared: I was experiencing “culture shock”.

The Merriam Webster dictionary defines culture shock as a sense of confusion and uncertainty sometimes with feelings of anxiety that may affect people exposed to an alien culture or environment without adequate preparation.

The stages of culture shock are the following:

When I found out I would be travelling to the United States I was really excited. I was filled with joy and thinking of my future trip must have made my face light up. I counted down the days and I made sure to have a proper farewell with my family and friends. I tried to imagine what the people would be like, to visualize how I would mature, what changes I would undergo. By the time I returned from the US, would I have made many friends, would I better understand the American culture? I couldn’t grasp what it would be like; I packed my clothes and hoped for the best.

A week before coming to America, I was in my comfort zone; I was reluctant to move to a country that I had only known through documentaries, films, novels, and short stories. I was leaving my home, Argentina, and I was unwilling to go to the US because I had everything I needed, or at least everything I thought I needed. I was afraid of the unknown.

The day of my trip came and I travelled to the US with my hopes and dreams held tightly in my backpack. I longed for improving my American accent and to better understand the American culture. The first three weeks I arrived to this country I felt as if I were in a bubble. Everything I saw was marvellous and new and shiny. I admired the American flag and the reverence that all Americans seemed to have when they referred to their country. I was fond of the amicable people I met on the bus, on the street, in the markets. I cherished the landscapes when I cycled through parks with my friends. I delighted in trying new foods such as waffles or New York City cheesecake. I even loved waking up early in the mornings with sunlight on my forehead and the church bells ringing.

The fourth week, I felt somehow alone and I found myself cranky and critical of the United States. I missed my home, my friends, and especially my food. I cherished drinking mate, or eating an asado with my family on a Sunday while drinking a good Malbec. I longed to eat Argentinean meat. I highlighted all the cultural differences that the United States did not have and that Argentina did have to offer me. The United States had a lot of junk food, more individualistic people as compared to the warmth of Argentinean people, more strict rules than the ones I have been used to, especially about punctuality. In short, different values. The activity of working was more important than spending quality time with your family.

I stopped looking at my culture and I started appreciating the bright side of the American culture. The people were more organized and they scheduled some trips months in advance. Meetings with friends were punctual and I felt comfortable about respecting time schedules and having everything organized.

After experiencing three months in the United States I can fully grasp some cultural concepts that might seem similar in both countries. However, I don’t consider that I have dual cultural identity yet.

Argentinean siesta is not the same than taking a nap. The first one is to sleep during a one to three hours from 2pm to 5 pm and the second one is shorter (like 40 minutes), and not more than one hour. American people do not need siesta because they go to bed earlier than Argentineans (a typical bedtime for Argentineans would be at 11- 12 am and they would also wake up early at 6 or 7am). Also in some regions of Argentina, the shops close during siesta time. 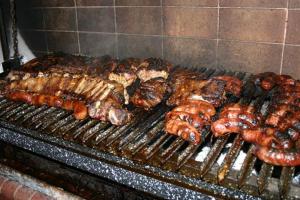 Sobremesa is time people spend sitting at the table while talking to the other people who shared the meal with you. Sobremesa is a cultural custom in most Spanish speaking countries. Coffe clutch or coffee klatch is a casual conversation when having a coffee. This custom is not commonly practised in the United States.

Experiencing culture shock was the best circumstance I could have undergone in life. Not only have I learned about my culture and the American culture, but I have also gained a deep understanding of myself. I became more tolerant about other people`s thoughts and beliefs and I could see life from other perspectives. I learned how to open my heart and show my true colors.

6 thoughts on “Better Understanding of the American Culture”